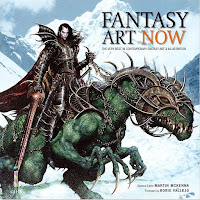 John Freeman just informed me that the 'The Extinction Hunter' cover that Keiren Smith and I did, has been selected to be in an upcoming art book called : SciFi Art Now , which is due for release in October in the U.K. and it looks like there will be a simultaneous release in the US.

This is very cool news for me, as its the first hardcover art book I've been in. The introduction is from veteran SF illustrator Chris Foss and the final line-up of art is a good cross section of talent, including work by Bob Eggleton, Ron Miller, Lee Gibbons, John Picacio, Rian Hughes and many others, at varying stages in their careers.

The blog is up at http://scifiartnow.blogspot.com . Closer to the release date, I'll be doing a '10 Questions' segment to answer whatever questions they can throw at me...and speak a bit about what I have coming out later this year. Keep watch here, I'll be sure to mention it!
Posted by Gibson Quarter at 1:44 PM